It is 1am as I start typing this. I’m often awake at this time – I’ve started going to bed once BuddyBoy is asleep, as I find it hard to sleep with the level of noise that he delights in. We are now sleeping in the living room (two rooms away from BuddyBoy’s room), and despite the extra distance, despite the cacophony of the ancient air conditioner we run at night, and despite my ear plugs, I still cannot sleep with the noise that he emits.

It’s a very happy sound – a high pitched squeal that any soprano would be envious of, at a decibel level that would rival that of a jet engine. He’s actually relatively quiet at the moment – he’s not doing his usual circuit of jumping off the windowsill, running to the door to slap his hands on it, then running onto his mattress where he throws himself down 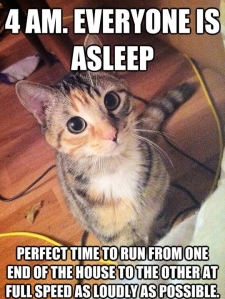 with a happy yell. He’s not tearing his magazines or his bedsheet while singing a nursery rhyme, in between knocking hopefully at the door in case one of us feels like releasing him from his night time ‘prison’. Thankfully, he’s not smearing poo either, although I cannot vouch for his floors being dry right now. He’s simply huddled under his sheet, squealing as loudly as he can at irregular intervals. One of his favourite activities.

Before I attempted to go to bed around midnight, I was filling out the ever-present paperwork. This time it was for the NDIS – the National Disability Insurance Scheme that Australians are being ‘rolled out’ on. For those Australian Autism parents who are reading this, you will know all about it and can skip ahead to the next paragraph. For the rest of you – the NDIS is a brainwave for a national ‘insurance’ that is meant to assist people with a disability to become more independent, and live more inclusive, productive lives. It is government funded (aka additional taxes on the working class) and is hopefully going to assist people to be able to participate in society and employment opportunities. Whether it will actually do this remains to be seen. The process was trialled in a few areas to show just how many ‘bugs’ there were, and is now slowly being brought in across Australia.

Our area is being rolled out as from May this year. Which means that in January, we received a phone call to confirm that BuddyBoy was eligible for the scheme. As he was receiving assistance from the Department of Health and Human Services, he was already on the list and we just needed to confirm a few details. For my other children with disabilities, I had to request a form to be sent out, which I then needed to have a medical practitioner complete to state that despite the previous expensive assessments and paperwork which the NDIS would subsequently ignore, my children did indeed need assistance. I only bothered doing this for my eldest child as I simply don’t have the energy right now to fight this battle for more than two children.

BuddyBoy is now alternating between laughing hysterically and coughing. I’m not sure which is more concerning. Although my ears are thankful for the reprieve.

The paperwork required for the NDIS can be quite daunting. Many people who have a disability and are going through the process unassisted, have found it difficult to not just navigate the process, but also to translate their needs into the bureaucratic jargon that is required. If you don’t know what to ask for, and how to phrase it correctly, you won’t get it. Simple — and money saving for the government. Which leaves a lot of people in a situation that’s worse than they were in before, and some have even given up as the sheer amount of stress and energy required became too much for them.

Thankfully I thrive on a challenge (those who know me are laughing at the understatement in that) and so I’m preparing my paperwork ahead of time. I thought it might be interesting to share that journey with those of you in Australia who are also going to be ‘jumping through the NDIS hoops’ by blogging about it as we go through it. Plus, it gives me a written record that I can show the media and our politicians if I have to lodge a complaint about the lack of assistance we received. 😊

I won’t be writing about what the NDIS process involves, other than how it is affecting us personally. If you’re in a similar situation to us, you might be able to get some ideas that you can add into your plan, or how to phrase your requests. Even if you don’t, you might just get a good laugh out of it, or feel thankful that your own situation is vastly different to ours!

My next blog post will be about our current situation, prior to NDIS. I can guarantee you that you will be shaking your head at the ridiculousness of our situation.

In the meantime — it’s now past 2am, the singing has come to an end, the giggling has been stifled, and I am listening to mumbling interspersed with the occasional shriek. At this rate, I should be able to get to sleep within the hour.   Goodnight. 🙂

Last week I attended an information seminar on the NDIS (National Disability Insurance Scheme). It won’t be starting in my local area until June 2017, but apparently we need to start preparing for it now.  The presenters were not from … END_OF_DOCUMENT_TOKEN_TO_BE_REPLACED